As summer drifts into autumn the garden starts to put itself to sleep preparing for the seemingly endless winter months. In the meantime this process is slow enough to allow us to appreciate the autumn garden. By late October my borders have become a wonderful tapestry of colours and textures with late flowering perennials erupting between clumps gloriously coloured leaves.

One of the best autumn flowering perennials is Aconitum. Although poisonous by nature, as long as you wear gloves while handling, there is nothing to beat these stately plants for colour at this time of year. While some varieties bloom in summer the rich blue flowers of Aconitum carmichaelii ‘Arendsii’ open in September and continue well into October. They are also loved by bees. 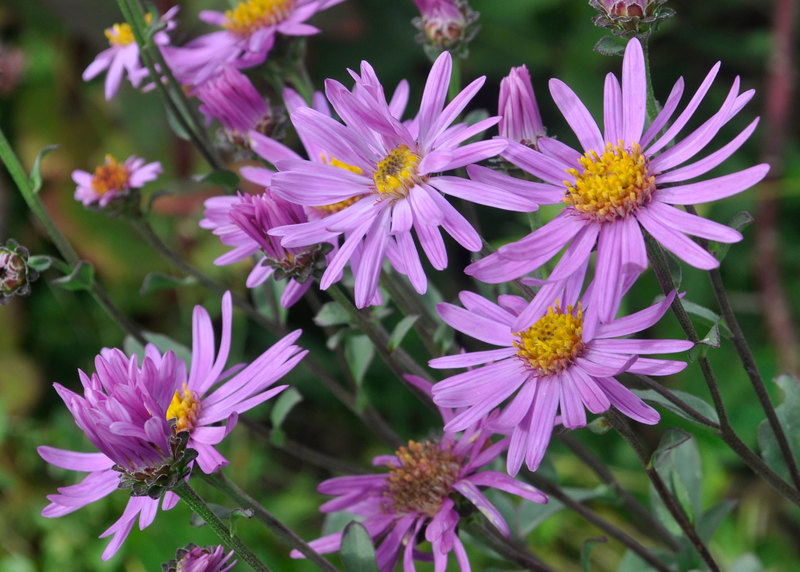 Asters are an essential autumn ingredient. By late September many have finished blooming, but New England Asters, which do not get mildew, flower right through to the first frosts. Forgive me for not using the new name of Symphyotrichum for the old, family name of Aster - it's not only a horrible name, its an unpronouncable mouthful. I really like Aster novae-angliae ‘Andenken An Alma Potschke’ (below right) for the clusters of vivid pink flowers that sit on stiffly, upright stems and a rich violet variety Aster novae-angliae 'Violetta'. Another lovely, very late variety is Aster novae-angliae ‘Purple Dome’. This creates a short, upright plant topped with rich purple flowers. Both are brash enough to brighten any misty autumn day. For more gentle colour select Aster pyrenaeus ‘Lutetia’. The soft lilac, blue starry flowers form a perfect low dome that is ideal for the front of a border. Below: Aster novae-angliae ‘Andenken An Alma Potschke’ 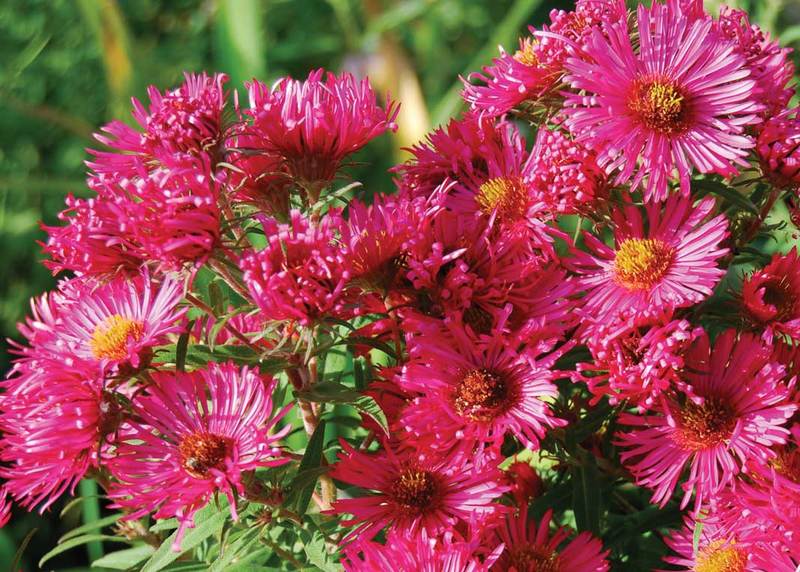 Some autumn flowering perennials are inclined be a little tender and need to be grown in a warm soil. One of the prettiest is Hesperantha, which originates from South Africa and is a delightful member of the iris family. It produces large, cupped, star-shaped flowers in shades of pink, red or white from October onwards. While Hesperantha needs a dry soil, Salvia uliginosa (Bog sage) likes a damp soil. An elegant South American plant, the spikes of large, sky blue flowers are carried on very tall, wand-like stems producing see-through height to the waining border.

Of course autumn is about leaves and some, but not all, perennials will briefly turn glamorous russet, orange and yellow shades. One of my top twenty all time perennials is Gillenia trifoliata (Bowman’s arrow) not just because the small, mid-green leaves turn brilliant yellow and orange but because it is wonderful throughout the year. Another all-round great perennial is Persicaria amplexicaulis (Bistort). This ends the long-flowering season with a flourish. While still in full bloom the large, oval leaves become burnished with red, turn yellow then melt away to brown.

Ornamental grasses add not just colour but texture to an autumn border. I grow only the shorter types in my borders because they combine easily with other perennials. Molinia caerulea ‘Strahlenquelle’ (Moor grass) is one particularly elegant later in the season when both the leaves and flower stems change colour to create a golden fountain. Stipa arundinacea (Pheasant’s tail grass) is another worth-while grass as the leaves stay handsome right through winter.