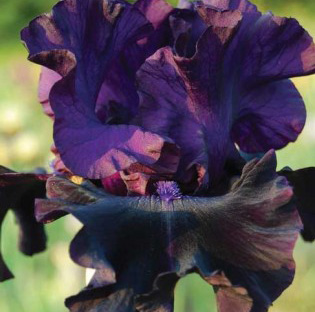 WHY AND WHEN TO DIVIDE
We tend to divide our bearded irises in September. However, they can be divided at any time from six weeks after they have finished flowering. Bearded irises are best divided when the clump is large and the rhizomes in the middle of the clump are starting to get congested. The rhizome is the bulbous looking part of the plant at the base of the foliage. As a general rule, this is around every three to four years, but shorter or more vigorous varieties may benefit from being divided every two years. A good indication on whether an iris clump needs dividing is to look at the central rhizomes. If they are not producing foliage but the rhizomes around the edges are, then the plant needs to be lifted and divided. Dividing encourages new vigour and stops the non-productive rhizomes from taking goodness from the soil. The result is better sized rhizomes and more flowers.

HOW TO LIFT & WHAT TO DIVIDE
Bearded irises are generally shallow rooted and digging around the edges of the clump with a fork should mean it is not too difficult to lift. I generally push a digging fork into the ground and then gently prise the iris clump out. I then 'bash' the underside of the clump against the fork handle to remove the excess soil. Removing the soil makes it simpler to see where to divide. Think of the clump of rhizomes as a bar of chocolate. Snap the individual pieces apart; keep the healthy, firm rhizomes with foliage and discard any without foliage or rhizomes that are soft. Soft or 'mushy' rhizomes are usually the result of bacterial soft rot which can be caused from acidic soil or high nitrogen levels in the soil. Be aware that soft rhizomes can smell incredibly bad and once inadvertently crushed in your hand you're not likely to risk it happening in the future! 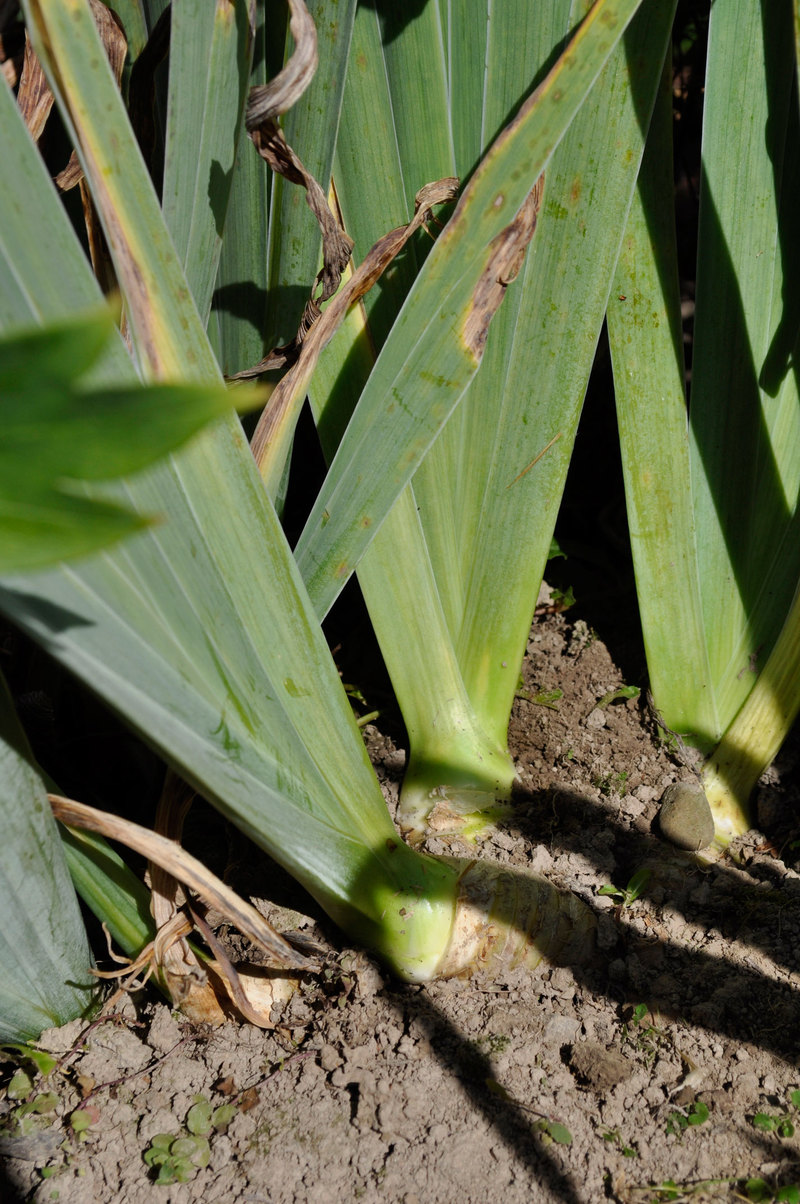 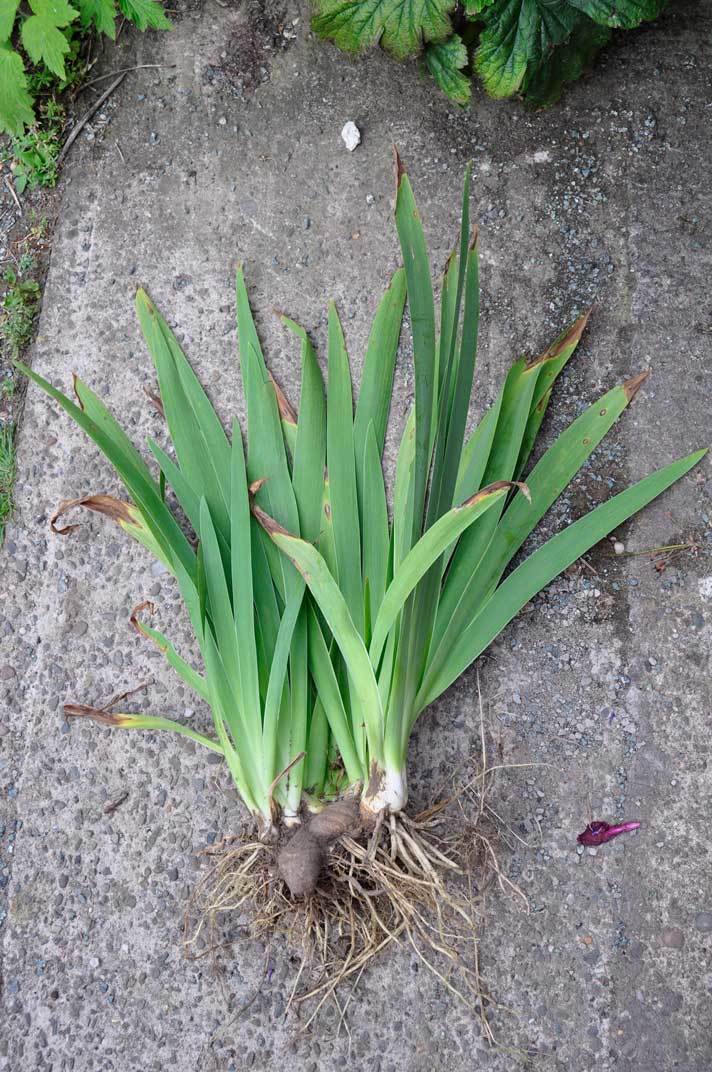 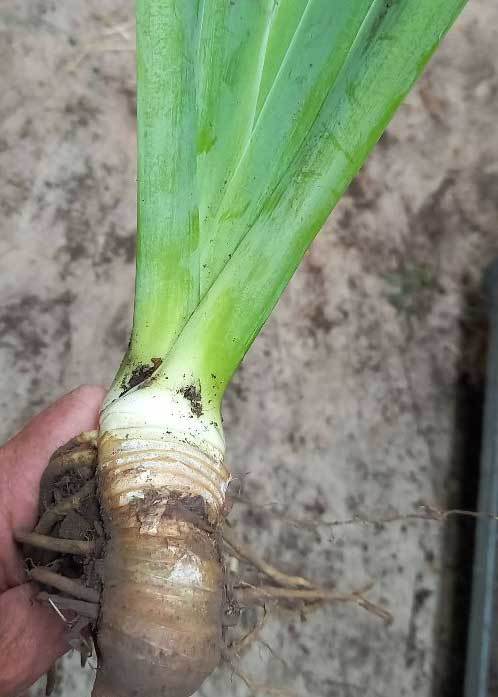 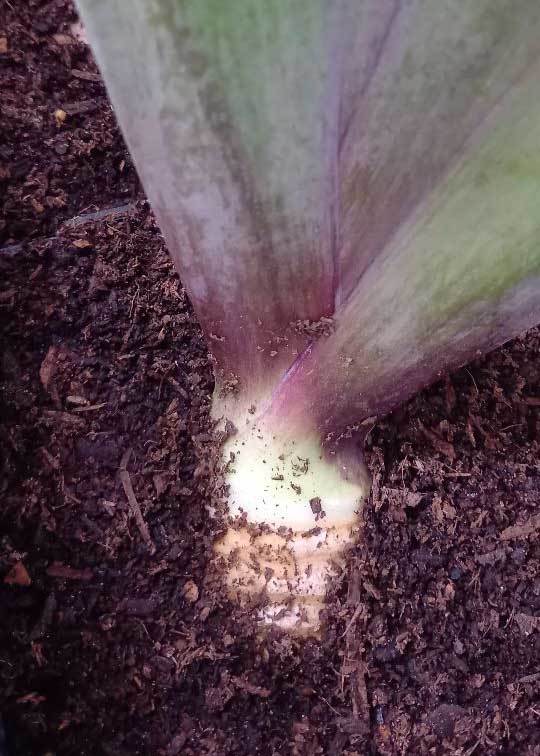 PLANTING THE RHIZOME BACK INTO THE SOIL

The rhizome needs to be partly exposed to the sun to produce flowers and as a gauge I generally recommend that leaving the equivalent of a large thumb print of the rhizome showing above soil level will allow enough sunshine to get to the plant. Having said that the size of rhizomes can vary from the size of an olive to the size of a clenched fist, so common sense is the key. You want enough rhizome covered to secure the plant in the ground while leaving some of the top of the rhizome exposed. Bearded irises seem to have an ability to 'lift' themselves slightly to chase the sun if planted slightly too deep and the natural growth of the rhizome also assists with sun exposure.

While irises enjoy the sun we do not plant them facing due south as some people suggest. Nor do we make a mound to plant the rhizome on. However, when choosing the position in which to plant your rhizome, make sure that no surrounding plants are going to cover the new plant as this will stop the sun from getting to the rhizome. If you are planting threes or fives in the border the irises will benefit from being planted in a circle with the non foliage ends facing the centre of the circle. By planting them this way, the foliage will create a circular foliage wall that helps prevent any other plants from encroaching on them rhizomes and so depriving them of sun.

TYPE OF SOIL
Irises are generally good growers even in a poor soil as long as it is well-drained and not acid. So if hydrangeas and rhododendrons thrive in your garden, it is likely that your soil won't be good for bearded irises. Pots may be an alternative particularly for dwarf iris varieties, but generally bearded irises are best in the ground and we don't promote long-term growing in containers although many people have great success. It is important not to feed irises with rich fertilisers or those that are high in nitrogen as these fertilisers can cause the rhizome to rot. If you're unsure, it is better not to feed them at all. Avoid putting fresh manure or any mulch near the rhizome as this is also an invitation for rot and disease. And a final word of warning, be wary of who you give excess irises to, you might just get them addicted to these wonderful plants. 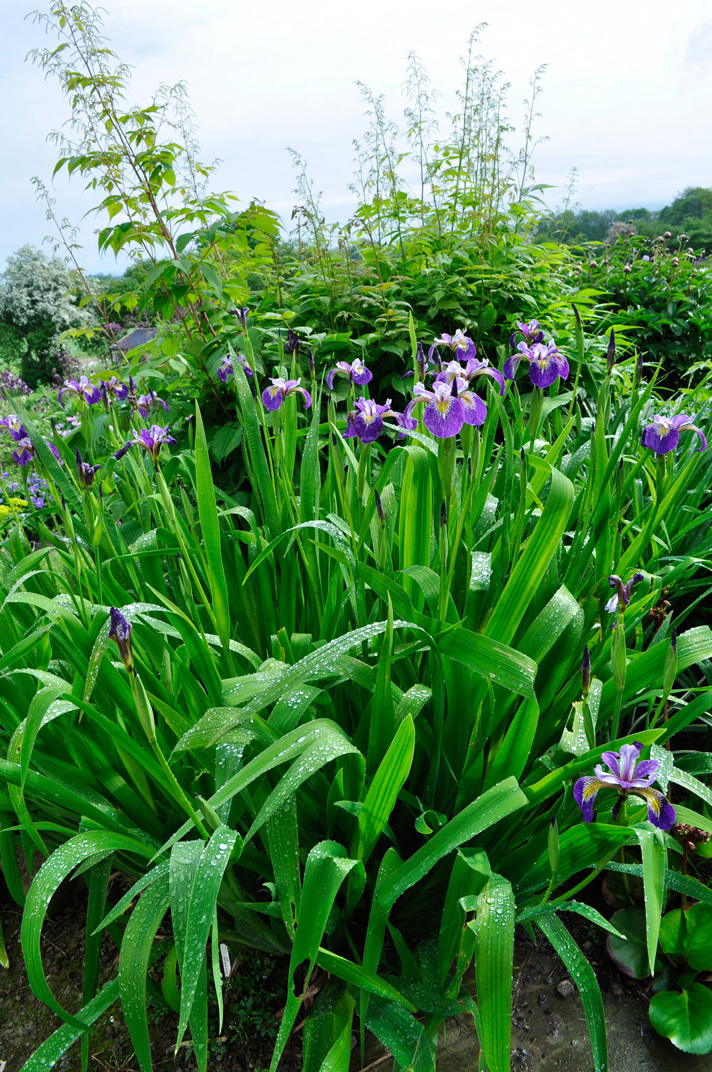 Beardeless irises, these are the types that do not have a beard on the lower petals (falls), are much simpler to divide and replant. Most won't need regular replaning as the rhizomes are much smaller and more numerous than those of bearded irises. If you do want to split a large clump, I find the best way to divide them irises is to slice them into divisions using a large kitchen knife or, if it is a very large clump, a saw. Small clumps are less likely to survive, so make sure they are quite generous, about the size of a mug is about as right. Cut back the leaves and roots to about the length of a hand and make sure the clumps do not dry out before replanting them.

REPLANTING BEARDLESS IRISIES
Dig a hole and place the plant in it just covering the very small rhizomes that are at the bottom of the leaves. This is easy, because this is where the leaves go pale - just like the bottom of a leek. Replace the soil and water in to prevent the plant from drying out.

Lifting and dividing irises is a very satisfying occupation and irises are tougher than they look. I should know, over the years we have moved thousands of irises.