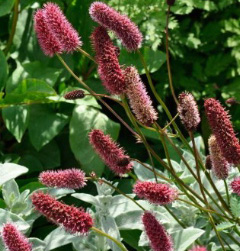 Sanguisorbas (commonly known as Burnets) are not the sort of plant that immediately leaps into the mind when considering what to grow in the garden. Which is a shame because these tolerant, long flowering hardy perennials are marvellous for creating a ‘see-through’ effect. They are easy to grow, trouble free and there are varieties for all positions in the border. 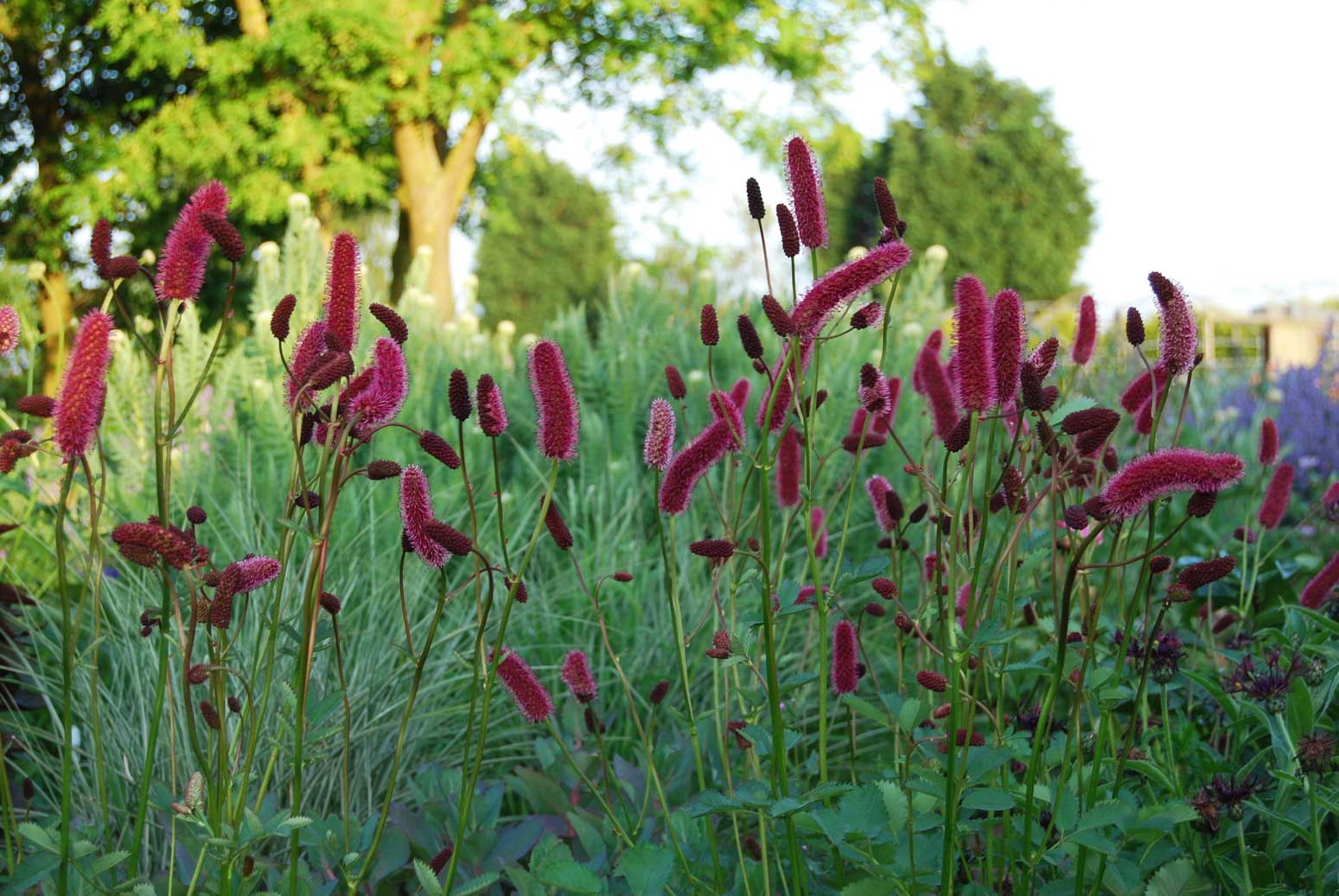 Not particularly showy, the flowers exude a quiet grace that is very appealing. Produced in great quantities they appear from late June until early September. Each flower spike is made up of many smaller flowers that have no petals, just sepals (these are normally found outside of the petals). As the flower matures thread-like stamens pop out, either in rings that work themselves up the spike or all at once creating a bottle brush effect or, if the flower droops, a shaggy tassel. Each spike last for weeks, eventually turning brown and becoming desiccated. If you rub them between your fingers they will fall apart giving you loads of seeds.

The leaves are known botanically as pinnate in form. Technically this means feathered, but on sanguisobas they resemble a ladder that is made up of small leaflets. Toothed around the edges, the foliage of taller varieties creates a clump, while on shorter varieties they form a low mat. 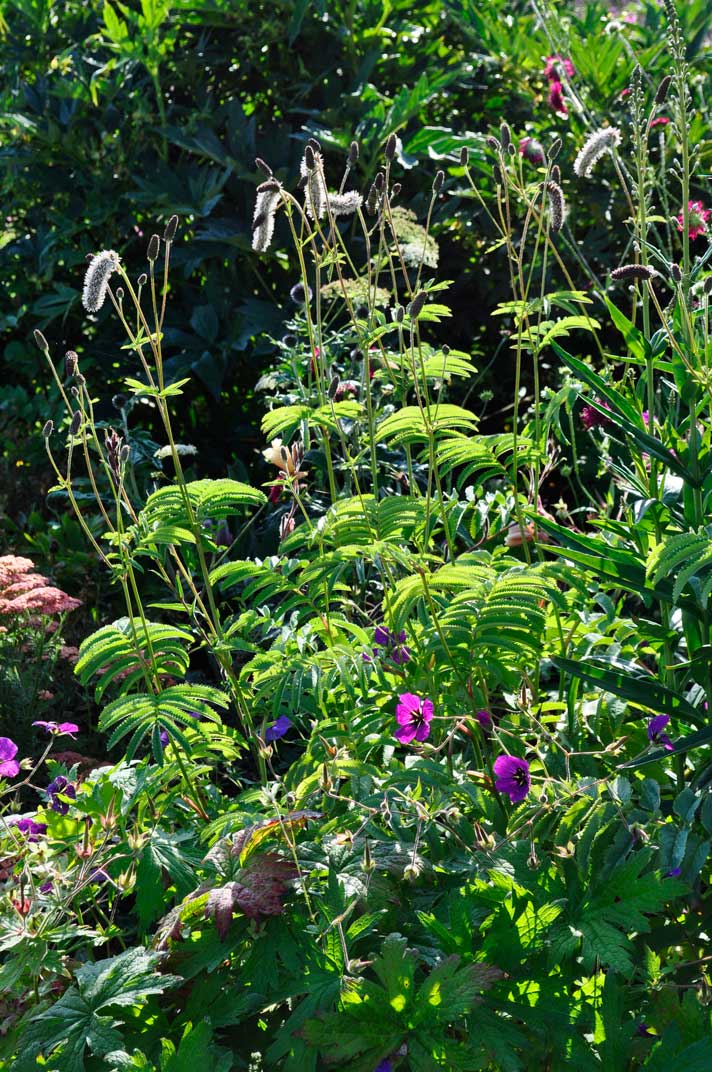 In the wild Sanguisorbas are found mainly in damp soils throughout the northern hemisphere, but I have discovered many varieties (especially the tall ones) that will grow happily in dry sandy soils. If your soil does dry out they are easily revived with a liberal amount of water. They don’t mind a sunny or partly shaded spot. I grow them throughout my borders with hardy geraniums, Achilleas, Lysimachia, Astrantias and Stachys to name just a few plants.

These days there are lots of different Sanguisorbas. This was not the case when I first started growing them 20 years ago. At that time there were only 3 types to choose from. Now the RHS Plant Finder lists 73 different species and varieties! In recent years new species have been introduced from the wild and Sanguisorbas, being rather promiscuous, cross-pollinate easily creating lots of new varieties. Below is a list of the ones I have grown, together with my comments. I have noticed, while browsing through the Internet, many nurseries offering plants that seem to be incorrectly named. I hope the ones I have described below are correct! 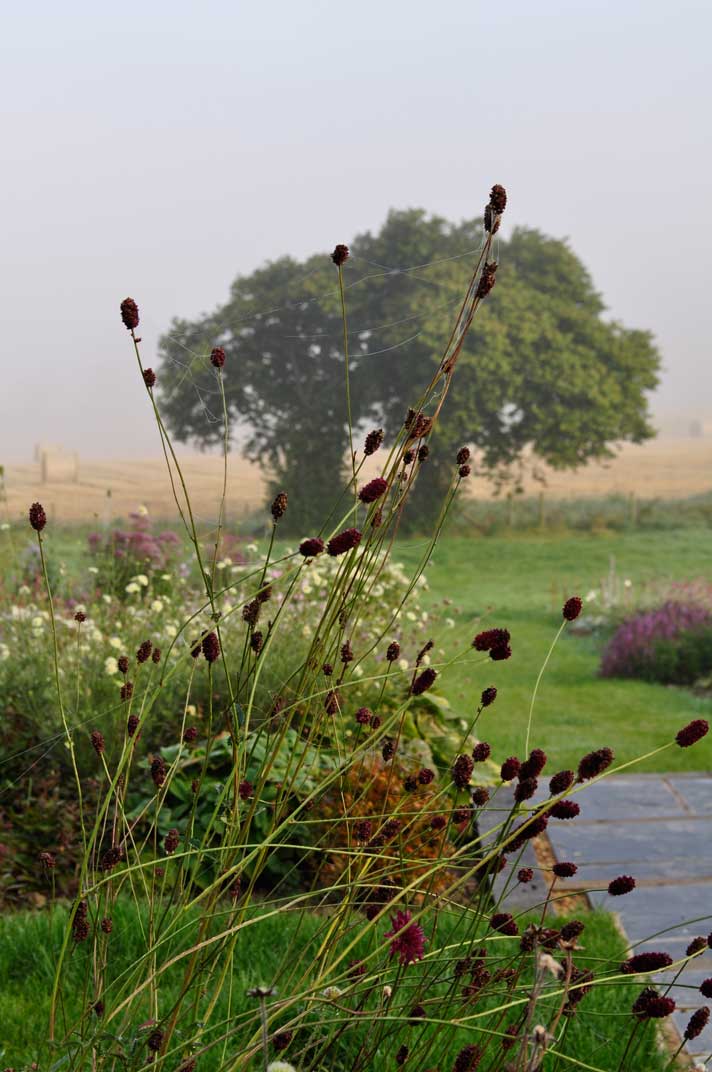 A delicate but tall plant, this produces short dark burgundy flowers on top of very tall, slender stems. The flowers are shaped like small pill capsules and as they mature rings of little white stamens appear at intervals. The leaves are narrow and soft green. As this is often grown from seed a plant might grow anywhere from 1m (3ft) to 1.5m (5ft) high. 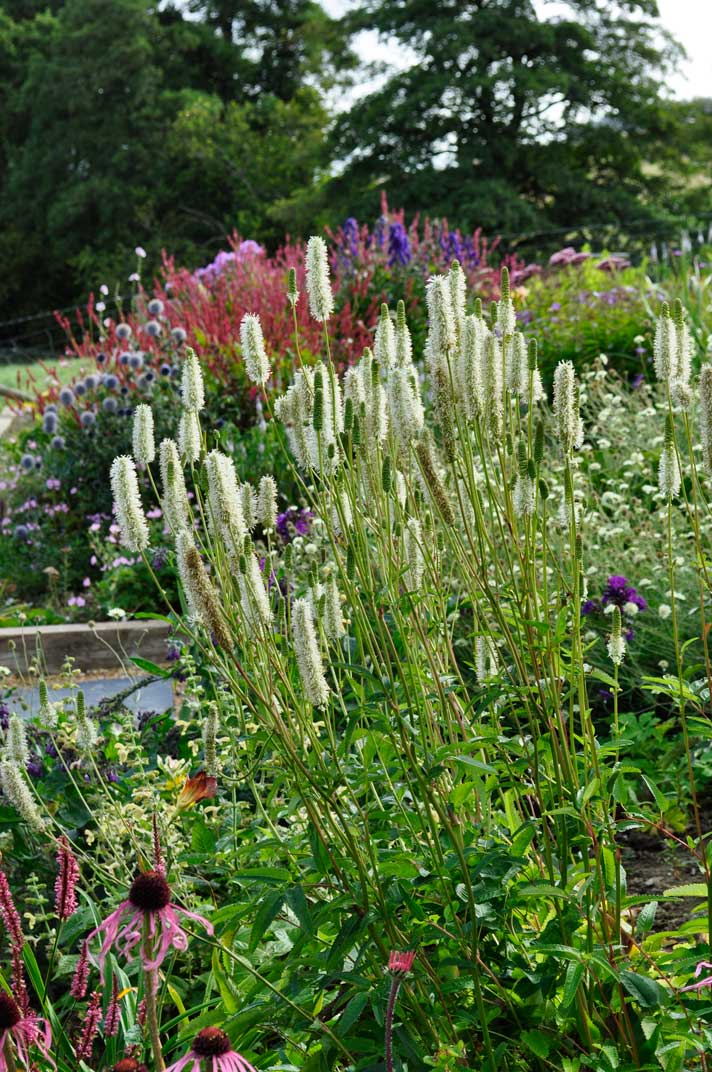 A useful plant this produces erect, long white spikes of flower. The flowers start life soft green and as they age white stamens appear making the spike fluffy. Long, narrow, mid-green leaves, serrated along the edges, are carried up the stems and at the base. This can grow up to 120cm (4ft) high. 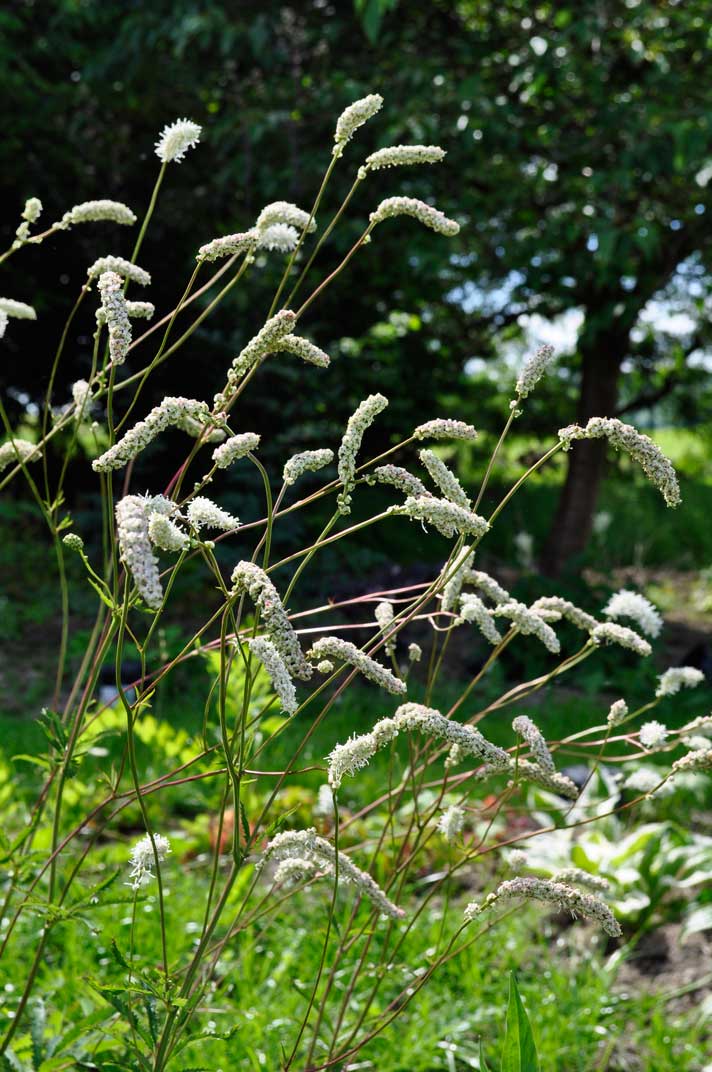 This group of Sanguisorbas, the Korean burnets, is not only elegant but perhaps one of the most useful tall border plants for creating a wispy effect. As the long upright flower spikes mature they gently droop over to resemble catkins. I have grown 3 different types. S. tenuifolia produces deep burgundy flowers, S. tenuifolia ‘Alba’ has paper white flowers and the flowers of ‘Pink Elephant’ are a rather appealing lipstick pink. All varieties have short white, whiskery stamens that emerge in rings. The flowers are borne above a clump of long, slender serrated leaves and they can grow to 180cm (6ft) high. 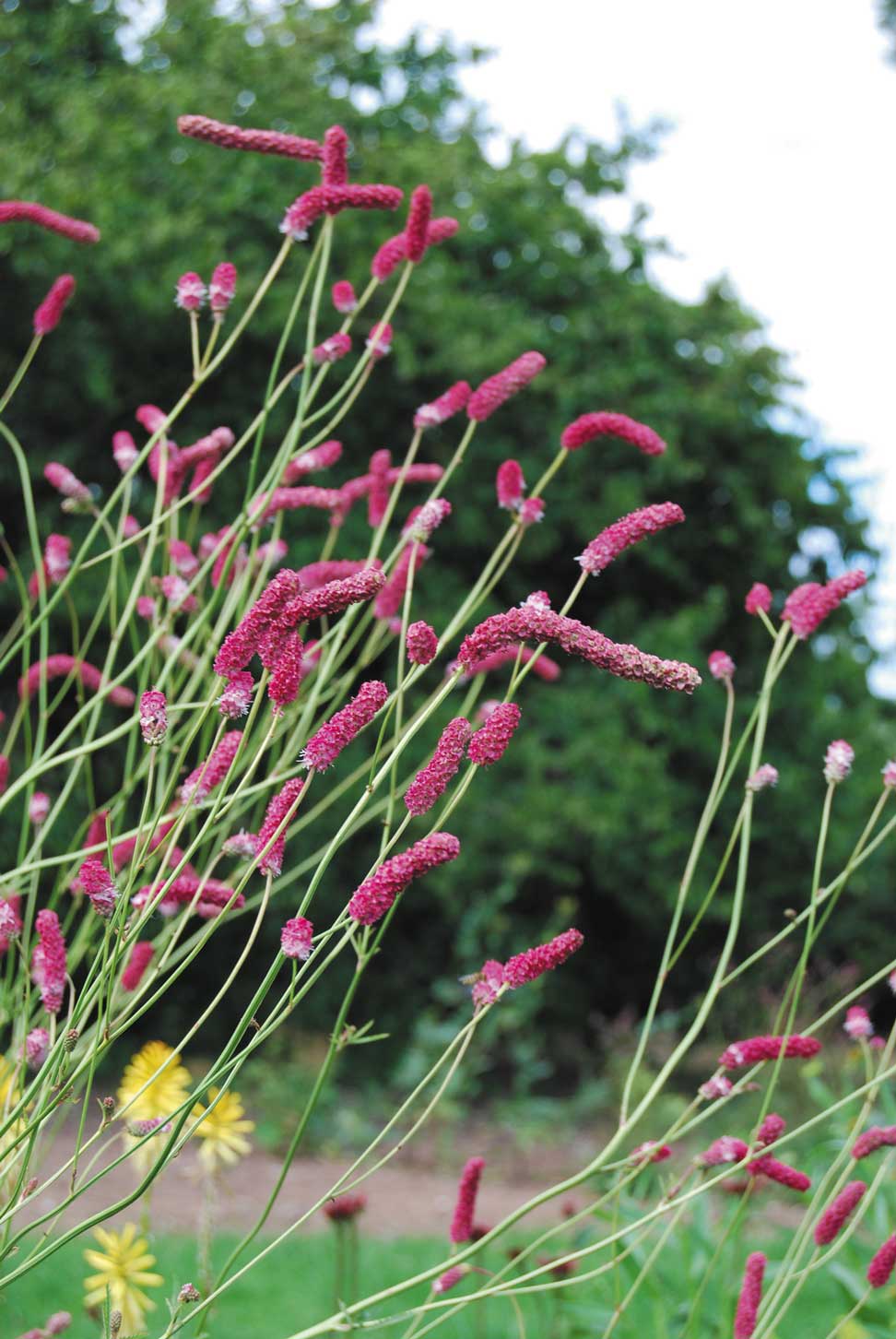 A distinctive Sanguisorba, this produces long fluffy maroon flowers and stamens that as they open to lean to one side. It has greyish green leaves that are tinted with red and form a most attractive mound. Some plant people think this it is a hybrid between Sanguisorba officinalis and S. canadensis. Personally, as it is so individual, this seems to be one on its own. It grows to around 45cm (18 inches) high and flowers before the others from around late June. 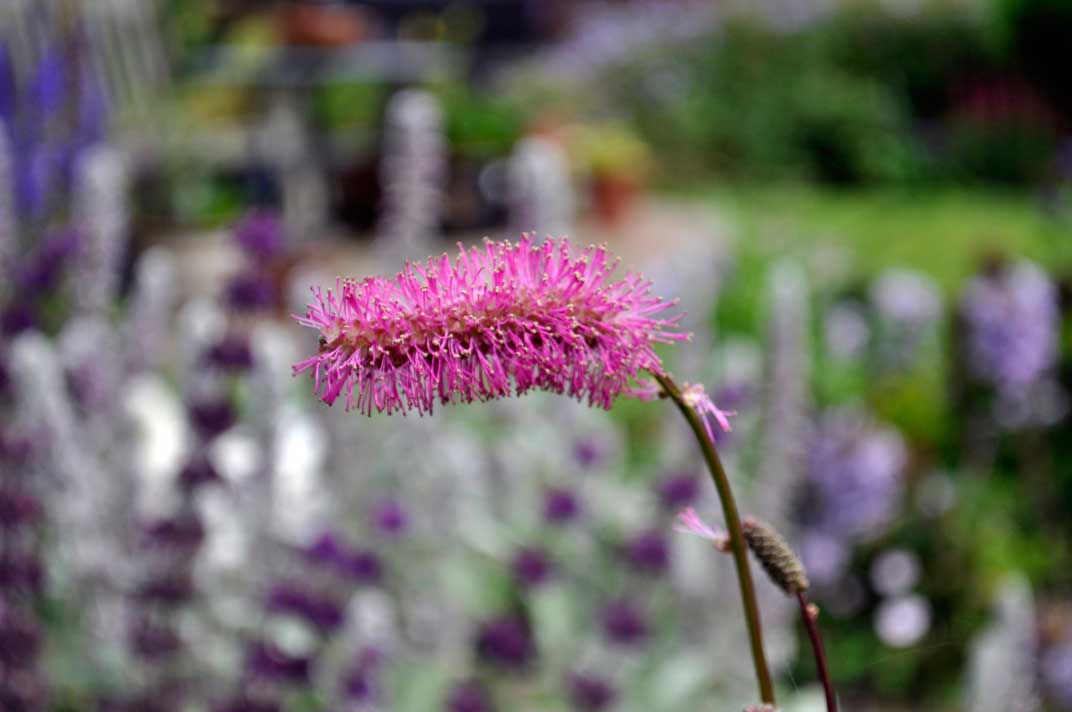 A fine plant, this has pale pink flowers with long bright pink stamens that are produced sparingly allowing the tiny flowers underneath to be seen. These remind me of rather naked hairy pigs, which is perhaps not the most flattering description for this lovely plant. The flowers are held airily above a low mound of mid green leaves and sit about 60cm (2ft) high. 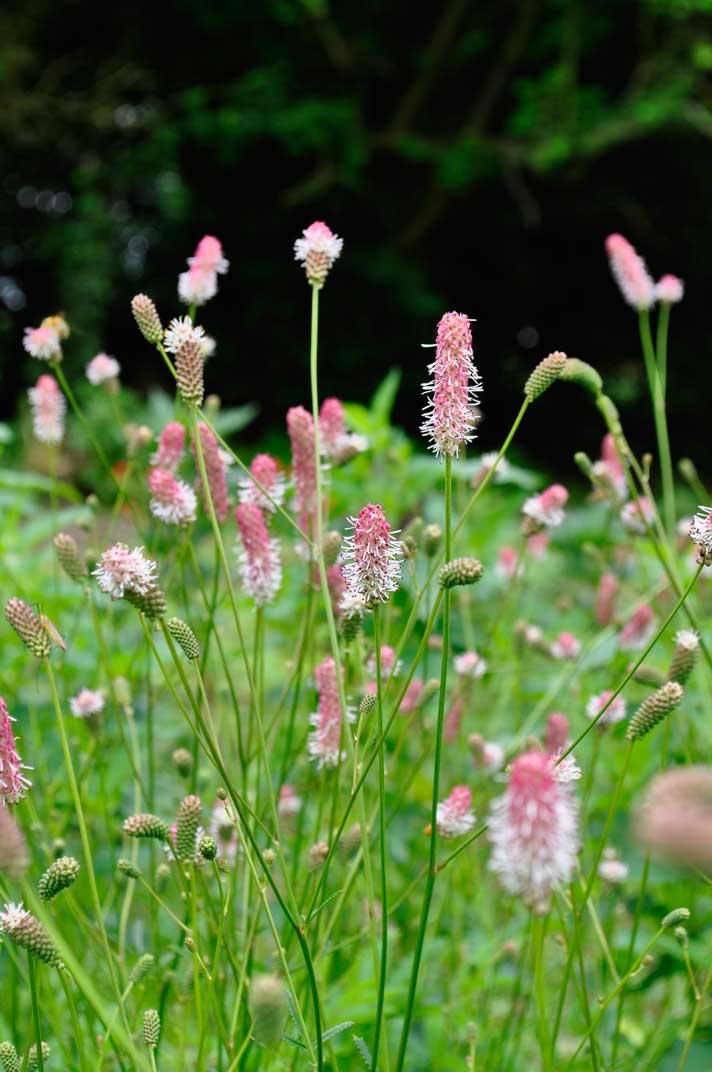 I really like this low growing pink form of Sanguisorba officinalis. It has long, capsule-shaped, soft pink flowers that produce rings of whiskery white stamens at intervals up the spike. These flowers are carried on very fine, branched stems above a mound of mid green leaves, and sit about 60cm (2ft) high. 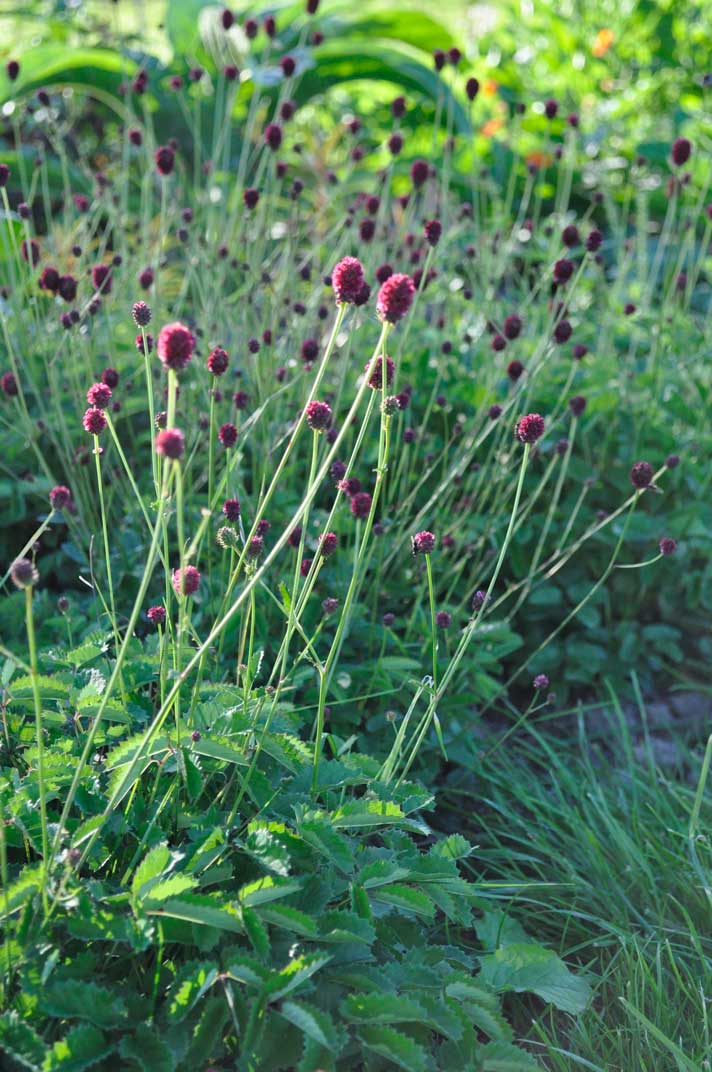 Like its parent Sanguisorba officinalis this produces small, deep burgundy flowers, which are carried on slender, mildly branched stems and look like small round bobble-shaped lolly pops. At the base is a slowly expanding low mound of small, round mid-green leaves. This is great for the front of a border as its flower stems only grow to around 30cm (1ft) high.

I include this just because it is so beautiful, but I have to admit I am totally stumped as to what it is. The name S. stipulata var rishirensis seems to be one banded about the Internet, but as far as I am aware I have never bought this plant. However, considering the variation of Sanguisorbas offered by nurserymen around the country (and illustrated on the Internet) I might have acquired this under another name. 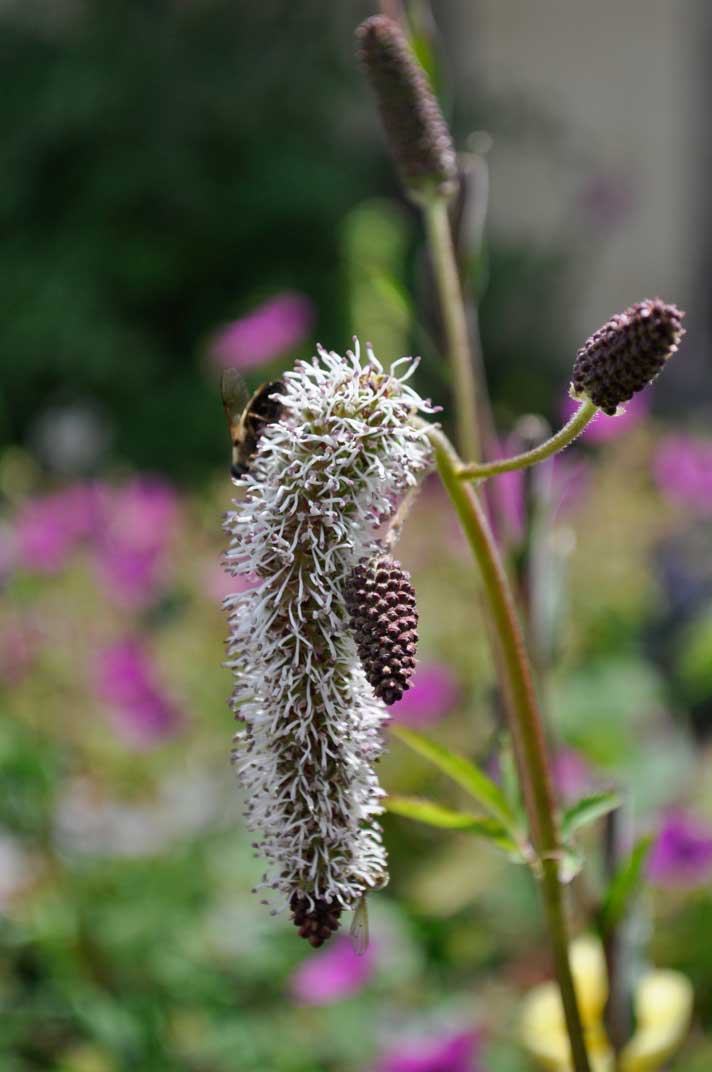 It produces deep burgundy flowers that are rendered two-tone by shaggy pure white stamens that are tipped with lilac. With time these flower spike droop elegantly downwards. The flower spikes are carried on tall, slender stems, which are branched towards the top, above a clump of mid green leaves that are not unlike those of S. stipulata, although I think they are more scooped. In our garden this grows to around 102cm (3.5ft) high, about the same height as Lysimachia ephemerum, which is sits next to.

If anyone can give me a name for this delightful thing – fire away!