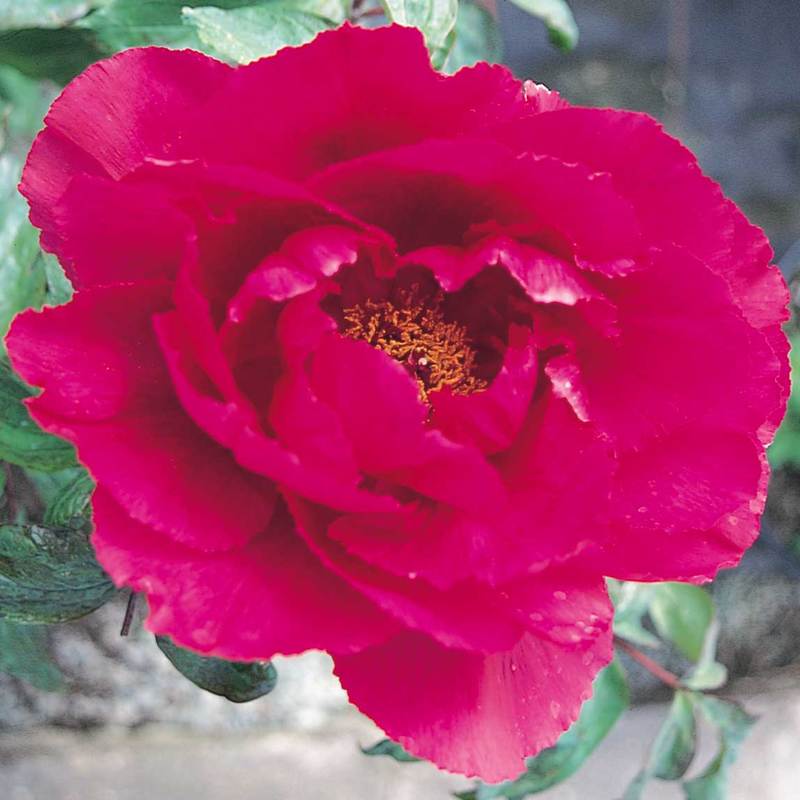 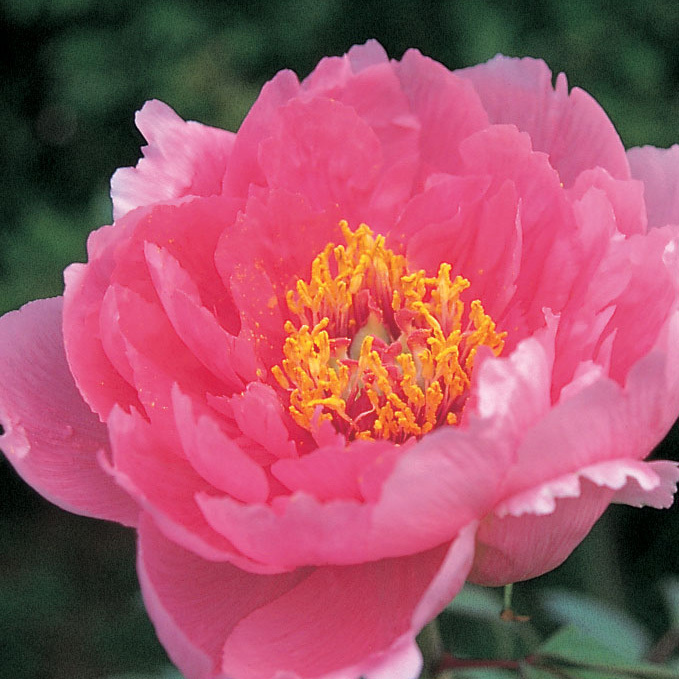 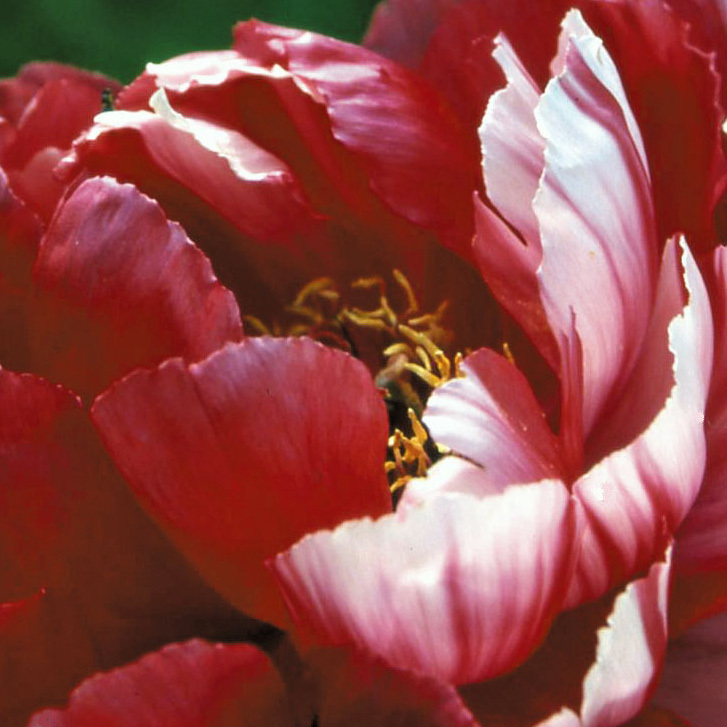 The term Tree Peony is a little confusing as it seems to describe a plant that grows to the height of a tree, which it does not. The main difference between Tree Peonies and their herbaceous cousins is that Tree peonies don’t die back in winter. After the leaves have dropped in late autumn a scaffolding of woody stems remains. For this reason they should more aptly be called Shrubby or Woody Peonies. The other difference is that the flowers and leaves are much bigger than herbaceous peonies and, until recently, they were the only peonies to produce truly yellow flowers.

Flowering between late May to mid June, all peonies like to be grown in a sunny spot, in well-drained soil. This includes a clay soil as long as it is not permanently wet. They can be grown in a pot as long as the pot is a very large. Replenish the soil in the pot every few years and make sure the plant is watered frequently early in the growing season. As a general rule the lack of water in spring and too little sunlight are the main reasons peonies don’t flower, while too much fertiliser can create lots of leaves and very few flowers. 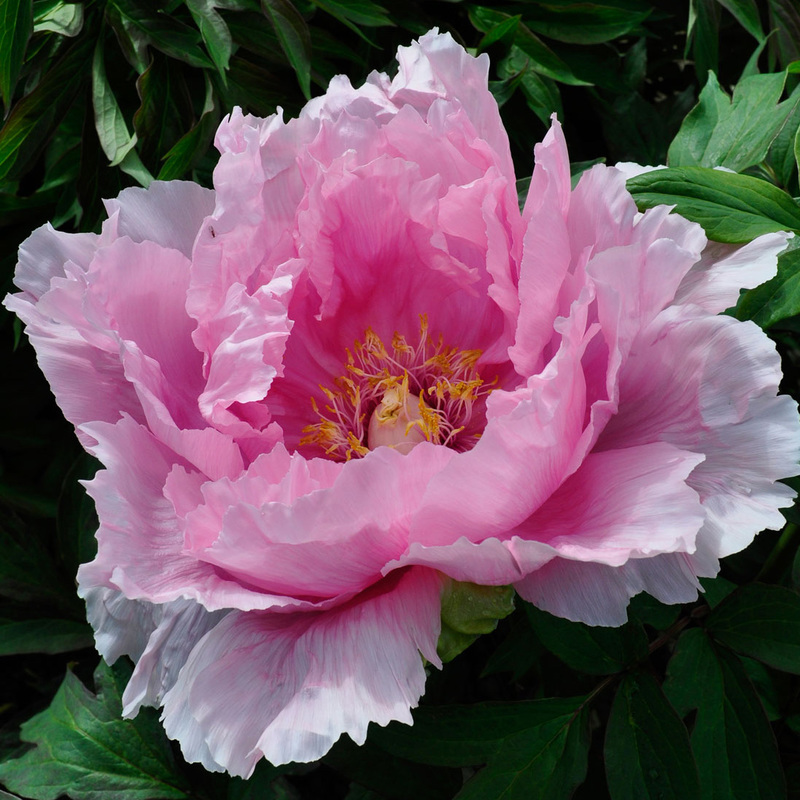 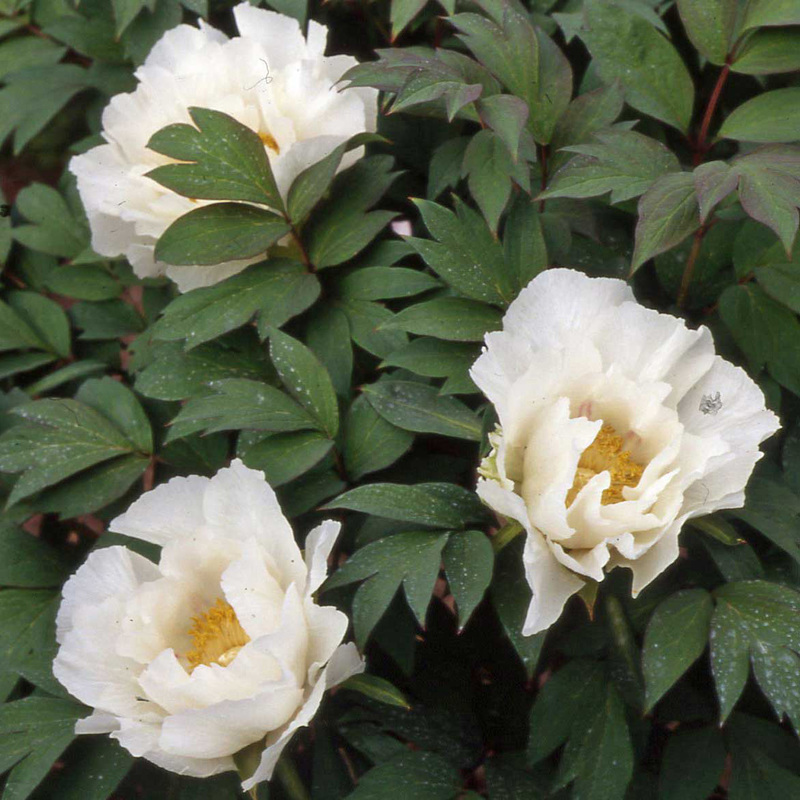 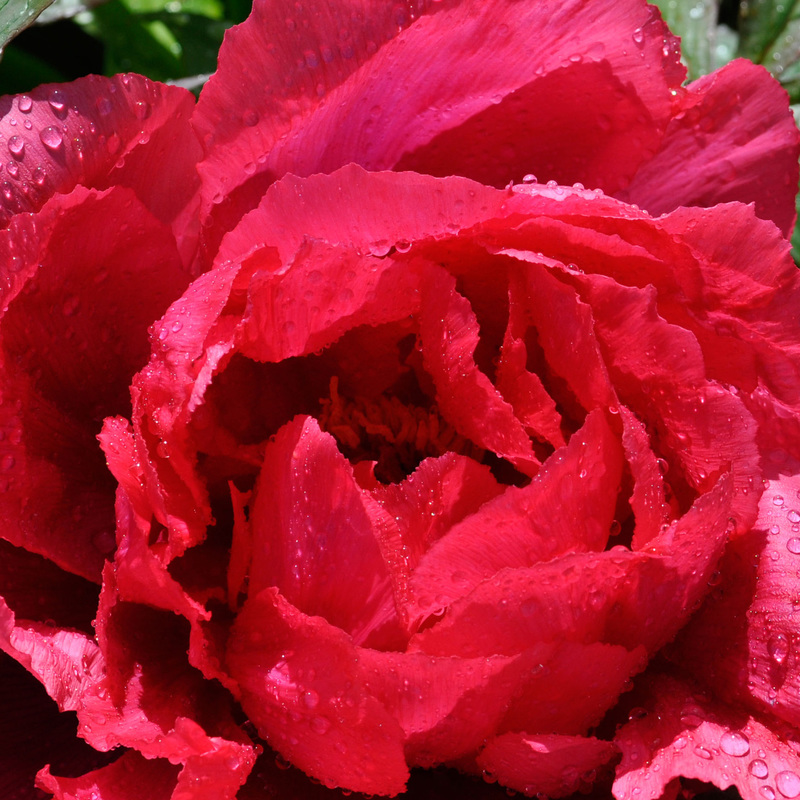 Tree Peonies are very hardy and long lived plants. They can be left undisturbed for many years, but the method of planting is important with grafted varieties (see below). Make sure the grafting junction is at least 15cm below the surface of the soil. This prevents the grafting stock from taking over. In autumn cut back the old leaves and prune any dead stems back to a new flower bud. If a stem is too big or the plant is a funny shape it can be pruned to a lower bud.

There are three basic types of Tree Peonies. The most readily available are the substantial Paeonia delavayii types, which are only suitable for bigger gardens. Paeonia delayavii produces small, very dark red, single flowers that tend to hide in the leaves. There are two yellow forms; P. delavayii var. delavayii lutea with small, single flowers and P. ludlowii, with bigger yellow flowers. As these are raised from seed they sometime cross and the resulting blooms can open beautiful shades of apricot and melon.

The most ancient Tree Peonies are those that come from China. Paeonia rockii is a well-known plant of Chinese origin, but the Chinese have been hybridising Tree Peonies for centuries. Highly regarded as garden plants, they were grown in the gardens of emperors as well as for medicine. The Victorians imported Tree Peonies from China into Britain, but although they were never in great demand the trade stopped with the Cultural Revolution of the 1960’s and ’70’s. With the opening up of China in the late 1990’s more have been coming into Europe. However, as they originate from northern China, which has a more extreme climate than Britain, I have found they don’t flourish and often fail to flower in our relatively warm, wet climate. The other draw back of is that they hide their beautiful flowers because they are so big and heavy the blooms often hang downwards. 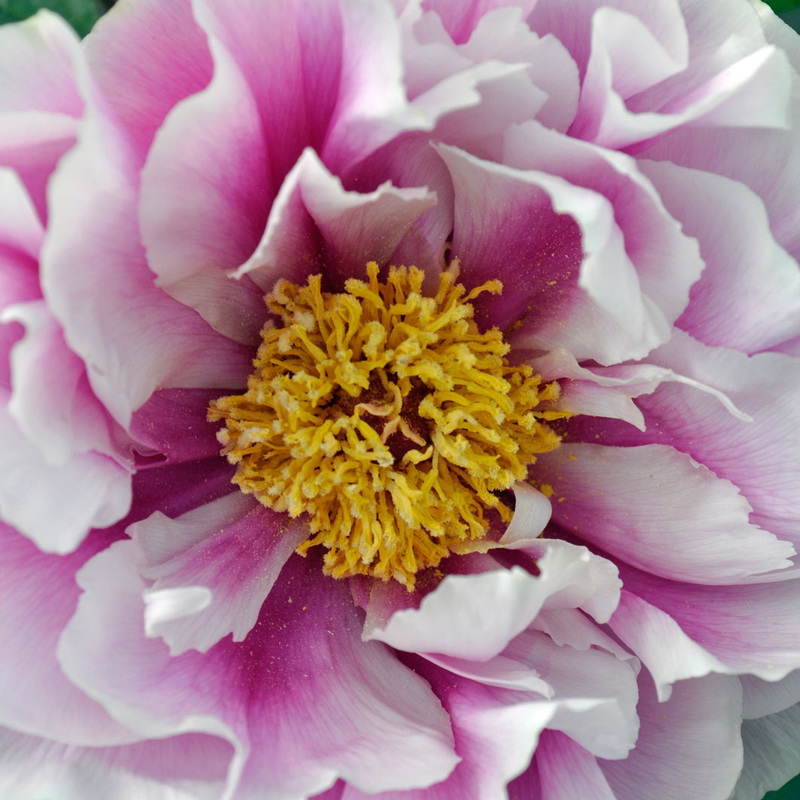 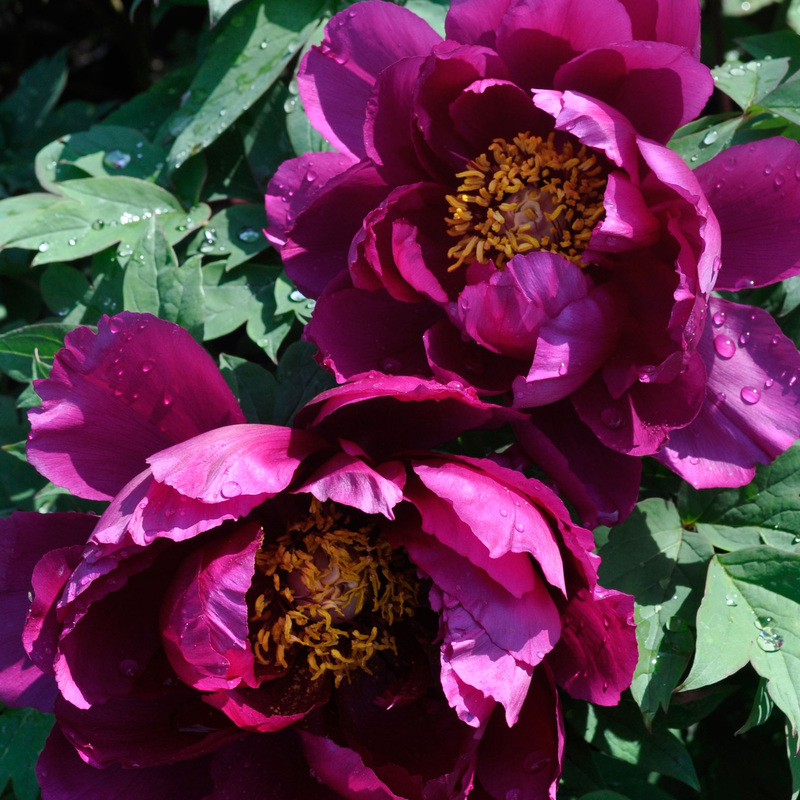 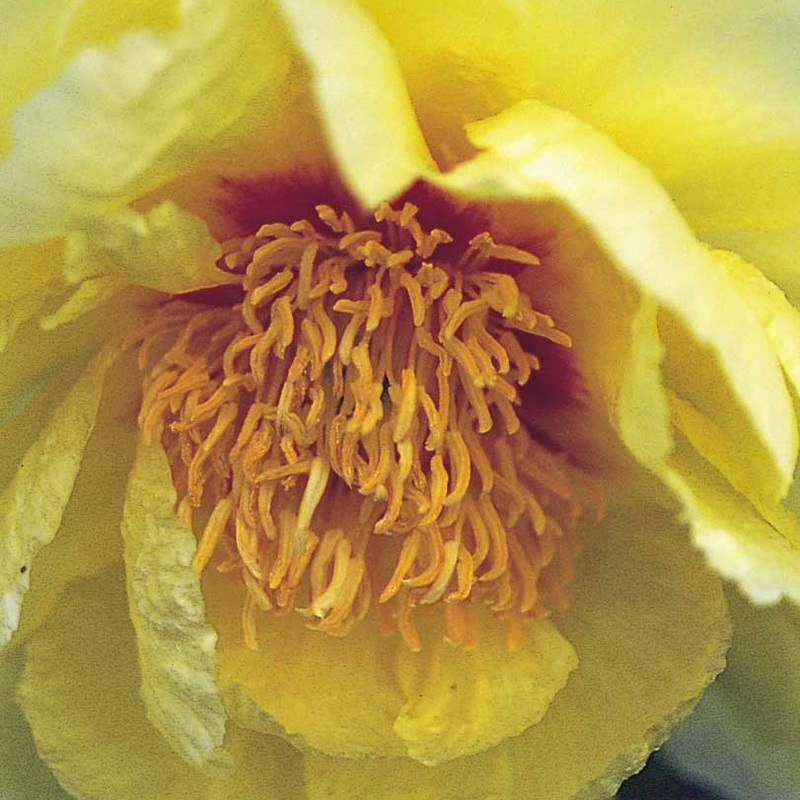 The Japanese Tree Peony corrects many of these issues. The glamorous flowers are single or semi-double and produced on a graceful, open shrub. In height they grow no taller than 120cm high, often less, making them suitable for smaller gardens. There is one downside and that is they can start into growth much earlier in spring than other peonies. The buds fatten rapidly on warm days, especially in February. This makes them prone to frost damage which causes the flower bud to shrivel and turn brown. So if you want to grow a Japanese Tree Peony, and these are the unnamed ones you tend find in garden centres, plant it out of from a frost pocket.

The third and most beautiful type, but one that is sadly the rarest, are the Tree Peonies raised by American A. P. Saunders during the middle of the twentieth century. These are known as Lutea Hybrids. They are crosses between specie and named peonies. The resulting plants grow to between 90cm and 120cm high, flower during June with blooms that face upwards and come in range of tones that varies from soft yellow to richest red. Like almost all Tree Peonies these propagated by grafting, a technique that needs much skill. For this reason many Tree Peonies are difficult to find and if you do find them they can be rather expensive.